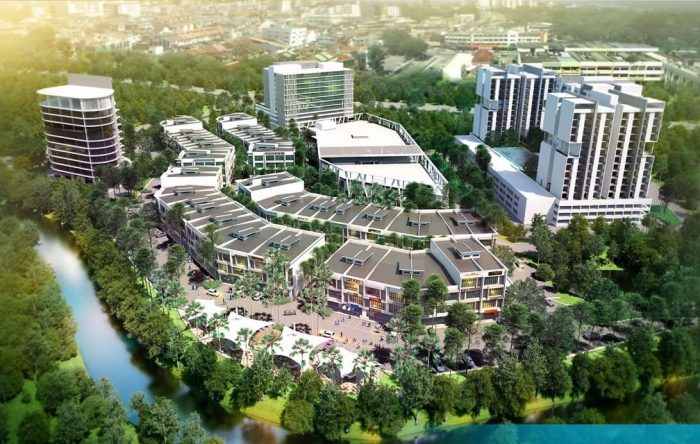 Basco Avenue is a major business centre at a premier commercial address in the matured neighbourhood of Ipoh, situated beside Stadium Indera Mulia Ipoh Sungai Senam. It is the largest Mix-Development in Ipoh Town Centre located at golden triangle area between Canning Garden, Fair Park , Stadium and Greentown Business Centre (within walking distance).

Spanning 17 acres, Basco Avenue is set to transform the Ipoh city skyline into an iconic lifestyle centre of the future. Comprised of business suites, vibrant shop-offices, a lifestyle mall and chic service apartments.

FOR seven years, Basco Sdn Bhd restricted its property developments to the northern part of Selangor, specifically Shah Alam and Klang. It has thus far developed projects with an estimated gross development value (GDV) of RM130 million.However, like all good developers, the company has ventured into the other states. Its latest development — and its first outside Selangor — called Basco Avenue, is situated in Ipoh, Perak. The first phase  of the project, at the corner of Jalan Stadium and Jalan Hospital, was launched on Oct 19 and has seen a take-up of 40%.Built on 17.7 acres of leasehold land, the mixed-use development comprises 3 and 4-storey shopoffices, retail outlets, a hotel and a 240-unit condominium, and has an estimated GDV of RM390 million. Basco general manager Che Fisol Abdul Hamid says Basco Avenue is a joint venture with the Perak State Secretary Incorporated (SSI), which owns the land.“The SSI called for a proposal and we were among the parties that submitted one. It found our returns the most attractive and hired us as its joint-venture partner.”According to Fisol, the area will be developed into a lifestyle business centre over five phases. The first phase offers thirty-two 3 and 4-storey shopoffices, and the second phase will have 29. The shopoffices have built-ups of 1,900 to 13,000 sq ft and are priced at RM1.4 million onwards. Phase 3 comprises the condominums,  which have an average size of 1,400 sq ft and are tentatively priced at RM490,000 or RM350 psf. However, Fisol says the developer is hoping to sell the condominums at RM400 psf each when they are launched.  The shopping mall will have a net lettable area of 120,000 sq ft. The developer is still finalising the plan for the three to four-star hotel,  which  will have 140 rooms with sizes starting at 400 sq ft. He says a three-to-four star hotel “is perfect for Ipoh because I don’t think we can get a lot of customers for a five-star hotel there. Even if we do, it might just be a handful of patrons,” says Fisol. The developer has already secured 40% sales for the first phase and targets a 90% take-up rate within the next six months.  The number of buyers from Ipoh and Kuala Lumpur are about the same, he says.Fisol hopes in the coming months,  residents from Ipoh will be attracted to the products the developer is offering.“Ipoh residents are a bit slow in making decisions compared with those in the Klang Valley. They come to the sales office three or four times and ask a lot of questions. Klang Valley buyers know what they want and commit faster.”Basco Avenue will offer the Ipoh market something different, he says.“We have collaborated with Telekom Malaysia to bring fibre-optic solutions to our project. This will supply the area with free WiFi and draw the attention of the local entrepreneurs.“We plan to make Basco Avenue a self-sustained neighbourhood.”The developer will also beautify the banks of Sungai Senam, which flows beside the development. “We will beautify the river banks, improve them with landscaping, build an almost 1km-long walkway and put a bistro next to it. Hopefully, we can invite people to come for business and leisure,” he says. The earthworks for Phase 1 have already been completed and piling work will start soon. The entire development will be completed within five years while Phase 1 will likely be completed in 2015.

More upcoming projectsBasco is eyeing more land in Ipoh, Manjung and other developed areas in Perak. Fisol says Ipoh is strategic as it is situated between Penang and Kuala Lumpur. “Land prices there are still low, so the products we can offer the market will be affordable and have high potential for capital gains.” Basco will continue to look for opportunities in Perak and is open to both land acquisitions and joint ventures, he adds, although the company is keener on joint ventures.The developer is also looking for land in the Klang Valley, but has yet to identify any good parcels. Still on the drawing board is a project in Seri Kembangan in Taman Datuk Demang.It will offer 232 apartments measuring 800 sq ft and above and priced from RM200,000. The name has yet to be decided on.Fisol says Basco is eyeing Klang Valley, Ipoh and Kuantan next year. “Hopefully, Basco Avenue will open up new opportunities to develop in Ipoh and the other states. Once people get to know us as a developer, we will have more opportunities to build elsewhere.”

This article first appeared in The Edge Malaysia Weekly, on November 25, 2013:

Lebar Daun brings to you the Building Revolution. It all started with a realistic appraisal of your living needs.